BOOK REVIEWS
We are interested in receiving book reviews on recent publications, and are delighted to publish our inaugural review... 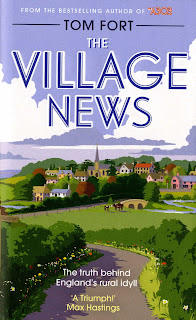 The Village News, the truth behind England’s rural idyll, by Tom Fort, Simon and Schuster, 2017 £14.99 HB £8.99 PB
ISBN 978-1-4711-5109-5
According to Tom Fort, there is no such thing as a typical English village. Most are determined by their geography, as manifested partly by their local building materials, others by history. Fort’s cycle rides take him from the Durham coalfields, to picturesque Devon and Cornwall and most counties in between. Many villages are ancient, though some, like his own of Sonning Common, are a mere 100 years old. Those spawned by the Industrial Revolution were thrown up rapidly and cheaply, while others grew in a slow, organic fashion. Yet what links them over a 1,500 year period is that their raison d’être was to work the land, whether on or below the surface.
Fort confirms that the English village is still alive, but barely kicking. Indeed, despite the Black Death, industrialisation, parliamentary enclosures and other losses undermining village life, it managed to survive, until the late 19th century. Then what we now call gentrification and suburbanisation engulfed Bourne near Farnham, as Surrey succumbed. More recently it has been  prosperity (for some) in the form of holiday homes, visited once or twice a year, that  has sucked the communal life from villages further afield, driven its young away to find low-cost housing, and often killed off the civic institutions that kept them alive. The last straw was the mechanisation of agriculture brought about by the two world wars. With agriculture died the crafts and trades associated with rural life, though TV programmes like the Victorian Farm series suggest many people are reviving or still practising old crafts.
Fort delves into the history of each place, often finding a piece of literature, like Sturt’s Change in the Village, Lee’s Cider with Rosie or a written local history like The History of Myddle to compare past with present.  He also talks to the locals, to take the measure of its communal spirit.
Heritage professionals will deplore many of his conclusions. He would like a bonfire of conservation policies like AONBs and Conservation Areas. He castigates the National Trust for preserving picturesque villages at the expense of housing locals in new buildings. But he rightly abhors the volume housebuilders with their dull and derivative designs, while he recommends de-suburbanisation by building at higher densities and the use of local building materials - essential to preserve the variety and character of an area. ‘The best of England is a village’, but that is only true if you can find a beautiful and thriving one.
Dr Linda Hall, Heritage Champion and Councillor, Tunbridge Wells Borough Council
Historic Towns and Villages Forum
Comments
RSS Feed